🍀 You don’t need luck when you have Irish Soda Bread! 🍀

What do we think of when March 17 rolls around every year?

If you are as food (and drink)-obsessed as we are, no doubt you want to celebrate this green day with all things Irish. Guinness is a given. But you can’t just drink without lining your belly for the fun! Things like stews, potatoes, cottage pie, and black pudding may be among the first to come to mind to celebrate in true Irish spirit. But you can’t eat them without some good Irish soda bread to sop up all the juices (alcoholic or not). Europastry’s line of Irish soda breads combine OldWorld traditional recipes and Irish flavors with some California-grown ingredients, to bring the best of both worlds to your table for this celebratory day.   What you might not know is that the combination of Old and New worlds, which is one of Europastry’s signature strategy, is actually at the heart of this humble bread. Although the Irish developed the recipe and it served them well throughout times of hunger and poverty, it was the Native Americans who first created this technique for baking bread. Go figure!

They were the first to make leavened bread without yeast with pearl ash, a natural form of soda formed from the ashes of wood. Firmly linked nowadays to Irish culinary identity, soda bread is relatively recent in the history of Ireland, dating back to the mid nineteenth century, when baking soda was first introduced there. Poverty and hunger were rampant, and Irish homes needed simple recipes with few ingredients, which would nourish them as they made do with the little they had. In its original recipe, Irish soda bread had only a few ingredients: flour, salt, baking soda, and sour milk. We currently use buttermilk, which in combination with the baking soda creates the leavening effect that creates small bubbles that give this bread its signature texture. Soda bread also caught on well there because of the varietal of wheat which grew well in the country’s climate, a softer wheat than the one used in traditional bread baking. Additionally, most homes at the time didn’t have an oven, so they baked the bread in pots or on griddles over an open flame, hence the signature triangular shape. 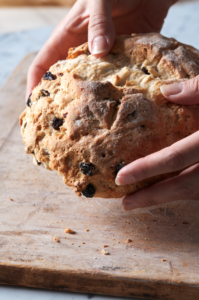 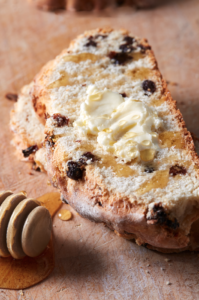 Nowadays we have come a long way from the widespread famine of the nineteenth century, during which some households had little more than this quick, nutritious bread on the table as a form of sustenance. However, Irish soda bread is still baked regularly and cherished as a national treasure. There is even a preservation society for it, so people won’t forget its humble origins and will continue to bake it and link it to their national identity! The main ingredients in the recipe have not changed much, though affluence has allowed us to add new ingredients to make it even more tasty. Some characteristic ones are caraway seeds, honey, and raisins. And just like in older times, there is no better way to eat it than to rip off a piece and slather it generously with delicious, creamy Irish butter!

Europastry offers several options of Irish soda bread that bring this Irish treasure to American homes, where the traditions of yesteryear are still commemorated as they should be, combining national pride with modern day fun. We follow the traditional Irish recipe, and use buttermilk and baking soda to create the desirable leavening, and creamy, tangy flavor. Our soda bread includes plump, moist California-grown raisins, which add a touch of sweetness, making this bread ideal to serve with meals in combination with traditional soups and stews, but also for breakfast or tea, to accentuate that sweetness by spreading with butter and jam or jelly.

If you are not craving soda bread yet, it’s because you haven’t read this far. Just after writing this article, we are signing off to rush to break off a piece and slather it in rich Irish butter. And since it’s morning, maybe some citrus marmalade too. Join us! Happy St. Patrick’s Day, cheers!

You will Love Our Irish Soda Bread
Read More